Respect of the Realm Details

Get the Latest Respect of the Realm 1.100 Mod + Data (APK) Full on our website now. This gorgeous Strategy based app is developed by Ostensible Games. The App comes with the latest version of 1.100 and size of 11M. Moreover, you just require Android 4.0.3 and up to run the App. We have updated it on April 18, 2020. Grab it now!

Respect. Honor. Power.
Are you clever enough to rise to the top of the medieval world?

SINGLE PLAYER HISTORIC STRATEGY
Manage your barons, collect taxes, equip your armies, negotiate alliances, and build your empire across some of the greatest conflicts from medieval history. Match wits against the French monarchy and Holy Roman Empire during the 100 years war or battle in the desert as the European Crusaders take on the Seljuk Turks, in the First Crusade. Each faction provides unique AI personalities and challenges in this surprisingly sophisticated feudal sim.

BALANCED LEADERSHIP
Respect of the Realm is an authentic economic and tactical simulation where the goal is to keep one step ahead of your enemies. Manage your knights, upgrade your weapons, and compete for strategic territories. Use spies to track down your rivals' supply wagons, infiltrate enemy defenses, bolster your own defenses with heavy weaponry and send your toughest knights on raids into enemy territory. But don't forget to keep an eye on your own men; RESPECT is everything and disloyalty is your greatest enemy. If a soldier steps out of line, you need to respond. Settle disputes, quell rebellions, promote your barons, throw lavish feasts, track down valuable rumors, secure rare weapons and appease the church with well-placed donations.

EASY TO LEARN, CHALLENGING TO MASTER
Don't let the retro style fool you; Respect of the Realm is an unforgiving simulation of power in the dark ages, full of honor, deceit, risks and rewards.

Playable maps include: Northern France during the 100 years war (free) and the Crusades (unlockable). Future planned releases include the Mongol invasion of Kiev and the Genpei war in Japan.

Fixed bug when donating a cathedral 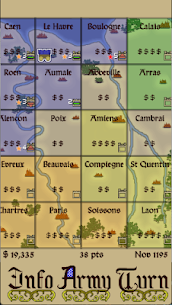 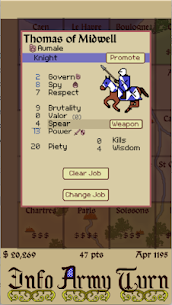